Csaba Sógor: we must continue to contribute to a strong Hungarian representation in the Carpathian Basin

“In the recent years, we kept the question of minority protection on the European agenda. Our goal hasn’t changed yet: we are continuing to fight for a common European framework for minority protection. Today, more and more people join us and call for the need to regulate minority protection at a European level, moreover, 1.3 million signatures draw the attention of the European decision-makers”- said Csaba Sógor on Sunday at the Protestant Theological Institute of Cluj Napoca/Kolozsvár.

Sogor and Winkler in Kovászna: the future of the Hungarians in Transylvania is in the European Union

The purpose of Friday’s meeting was to shape Europe’s image in the press. Csaba Sógor and Gyula Winkler were asked about the latest important happenings in Europe and the changes the European Union has brought to the everyday lives of Hungarins in Transylvania. The RMDSZ MEPs participated in an interactive conversation in Kovászna/Covasna at the invitation of the Youth Council of Háromszék/ Trei Scaune.

Csaba Sógor: We are trying to avoid the decrease of EU funds

“Our communities can only develop, if we are able to take advantage of the opportunities offered by the European Union. Transylvania can only be developed with efficient local governments and their persistent work” - said Csaba Sógor. The RMDSZ MEP participated in the annual report on activities of Gheorgheni/Gyergyóremete town council. The council spent more than 4 million euros of EU funds on various local developments.

Csaba Sógor: There is a need for Christian thinking and politics in Europe

"In this ever-changing and stressed Europe there is a need for Christian values, consistency and experience" - argued Csaba Sógor at the meeting of the Democratic Alliance of Hungarians in Miercurea Ciuc. He expressed the need for the Hungarian community in Transylvania to live and grow in a Europe that is strong. He reasoned that if there is a problem with Europe, and if there is a problem with Brussels, it is so because a lot of Christians made the decision to abstain from politics, as if though politics was something sinful that should be avoided.
2018-12-07

South Tyrol is an exemplary region for us, started the meeting Sándor Tamás, Chair of Covasna County Council on Friday. The main speaker of this event was MEP Herbert Dorfmann, who arrived to Transylvania at the invitation of MEPs Csaba Sógor and Gyula Winkler. The first stop of the two day visit was Sepsiszentgyörgy.
2018-10-21

Csaba Sógor: We must create equal opportunities in all areas of life, based on Christian values

More than a hundred women participated in the 5th Conference of Women in Szeklerland, held in Gyergyóremete/Remetea. The host and organizer of the event was the RMDSZ Regional Women’s Organization in Gyergyó. The two days event of the women from Szeklerland region had the topic Woman of a thousand faces which was approached from the point of view of both genders.
2018-09-03

Csaba Sógor: the power of small communities can save Transylvania and Europe

The power of small communities can save Transylvania and Europe – Csaba Sógor in Tărcești/Tarcsafalva, at the local Unitarian church on Sunday, 2 September.
The RMDSZ MEP reminded the audience: the 450th anniversary of the freedom of religion, together with the Unitarian Church was launched this year to emphasize the importance of the church in Europe.
2018-08-11

Csaba Sógor in Târgu-Mureș: the EU can and should be criticized

“The EU has a lot of advantages, but it can be criticized as well. In the present the union is shaped by the European nations and the future is also in our hands. As a consequence, our responsability is also shared" - said Csaba Sógor in Targu-Mures, at the Sapientia Summer University of the Targu-Mures department. 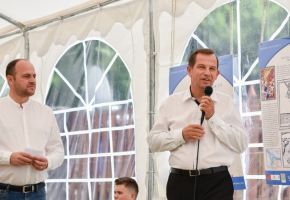 The exhibition about king Matthias was opened on Sic Fest

The exhibition called The glorious days of the Hunyadi dynasty was opened with the occasion of the king Matthias memorial year on Summer University Sic Fest by MEP Csaba Sógor and Róbert Grüman, Vice-President of Covasna County Council. 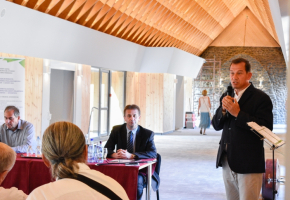 “Europe is more than a simple financial or economic issue. Thinking about the past three years and the immigration situation, we realize that the EU is vulnerable not because of its economic but its moral crisis”- said Csaba Sogor in Borszék, where he was invited to talk about Europe’s past, current and future challenges.