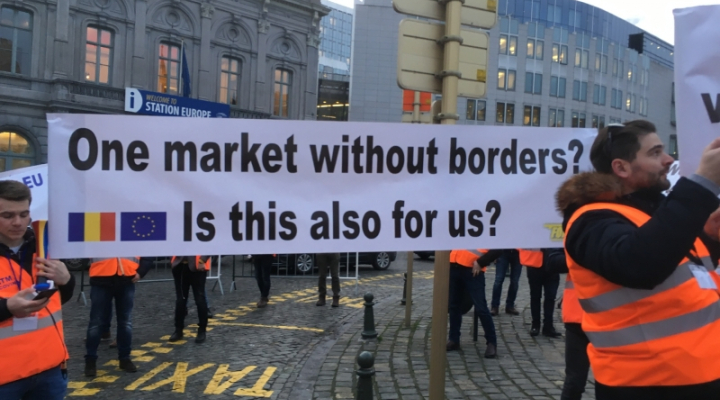 Csaba Sógor: we continue our fight for the protection of the interests of Eastern European truck drivers in the EU

On Thursday Romanian truck drivers were protesting in front of the European Parliament in Brussels against the package new draft legislations on international mobility, which, should it pass, could have the consequence of them losing their competitive advantage and being squeezed out of the European transport market.


Is Eastern Europe just a market, are we not part of the EU? - such and similar banners were held by Romanian truck drivers, whom were greeted by MEP Csaba Sógor. The RMDSZ politician explained protesters the way in which he and his like-minded colleagues have been protecting the interests of Eastern European transporters for over a year now in this debate. In the plenary of the European Parliament they have managed to reject the document twice already and send it back to the Transport Committee (TRAN).
“Although the debates have been going on for some time, it is only now that the importance of the topic is now starting to gain awareness in Romania. It is key, that the Romanian enterprises and drivers made an appearance here today, together with their Eastern and Central European partners, and organized an ample protest right before the voting took place in the Transport Committee. It is necessary to state out loud that we, Central and Eastern Europeans, are not secondary citizens of the EU. We cannot let our interests be pushed aside” - explained the MEP, who reasoned that is too often that we, Central Eastern Europeans, are following the political processes that are taking place in Europe as mere spectators without being able to stand up together for our interests and make our voices heard.
Csaba Sógor elaborated that the draft would be disadvantageous in many ways for the otherwise competitive Central and Eastern European transporters. According to the draft of the European Commission, international transport companies would, on the one hand, be forced to pay the locally determined wages of truck and bus drivers in each country that they would pass.
The Transylvanian MEP stated that the regulation concerning equal pay would primarily benefit companies from Western Europe, as the costs of Central and Eastern European ones, who are currently more competitive, would increase, a situation which, sooner or later would lead to their squeezing out of the Western market. At the same time, over-regulation that increases administrative costs and also goes against the principle of free competition would not only put into a difficult position small and medium sized enterprises, as opposed to companies with bigger capacities, but it would also significantly increase the prices of transported goods.
The MEP of RMDSZ acknowledged, that the current legal framework is not adequate either, as some Western European  states have implemented their own regulations in order to protect their transport market from less expensive Central and Eastern European competitors. According to Csaba Sógor these measures go against the principle of the common market, which is one of the most important accomplishments of the EU. “We could only support a legislation, that does not place administrative burdens on enterprises and does not lead to the fragmentation of the common market” - explained the Transylvanian MEP, who has actively followed the file and submitted amendments in order to improve the original draft.
Vissza